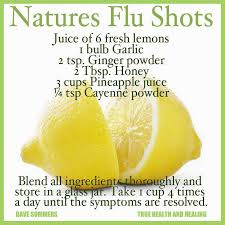 Do you think that the flu shot will you make you sick?  I don’t know if it will or won’t.  I am not a doctor.  But I don’t get a flu shot because I think there is too much guesswork involved it the creation of it.

There are over 300 strains of the flu virus.  The scientists have to guess which three will be dominant in the next flu season.  Then they build it and hope they guessed right.  Sometimes, they guess right on all three.  Sometimes they get none of them right.  WOW!

So there is no guarantee that they will get the right virus, but these are the other ingredients included in most vaccines.  ( You have the right to ask about the ingredients in the flu shot that your doctor has.)

After doing the research, I don’t feel that this shot helps enough to be putting all this junk in my body.  I prefer to build my body up and get plenty of rest during flu season.  I found this recipe, that is amazing.  It sounds weird, but if it works …weird is ok with me.  I hope this tip helps you decide what to do.

Here is a list of some of the more disturbing and dangerous ingredients you’ll find in common vaccines: