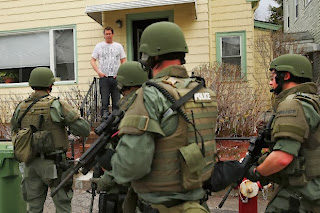 Can you imagine having a 72 hour window to prepare for martial law?  Could this be true?

I don’t know if it is or not.  There is a lot of scuttlebutt on the internet about economic collapse and civil unrest. I found this quote on a news blog,

The timing of the Boston Bombing with the national partisan gun control debate is a collision of two events that were hard to overlook when you take into account the very real Katrina-style imposition of Martial Law which descended  so quickly on the city of Boston last week.  Would the federal government use an opportunity like that of the Boston Bombing in order to grab residents’ guns under the guise of national security?

During the aftermath of Hurricane Katrina, local and federal law enforcement were openly confiscating lawfully-owned firearms from residents, in some cases by force at gun-point, and many were speculating this past week whether or not this would indeed happen in Boston as police put the city on lock-down while searching residents’ houses door-to-door in what has been said is America’s largest-ever manhunt for suspected student, Dzhokhar Tsarnaev.

I don’t know if this is the case, but I heard a very interesting woman speaking on this subject.  Her theory is that we all need to be aware of a situation where the government says  “Hey,we have a compromised bank system.  Our ATM/debit card system has been hacked.  On Friday, we are gonna close down all electronic banking… but it’s only for the weekend.  By Monday, everything will be hunky dory.”

This is the a HUGE red flag!!! You have 72 hours before martial law is implemented.  The government closes all the bankcards down.  People hunker down, cause no one has cash, right?!  Then Monday am, the soldiers are on the streets , the government is controlling the banks and  the traffic and confiscating guns and valuables under martial law rules, for our own good of course.

I have no idea if any of this is true.  No one knows for sure.  I am only sharing this information, so that if this situation ever crops up… you can keep it in mind.  If you see this situation you will be able to make a decision based on your understanding of the facts.  I am keeping my ear to the ground, just in case….